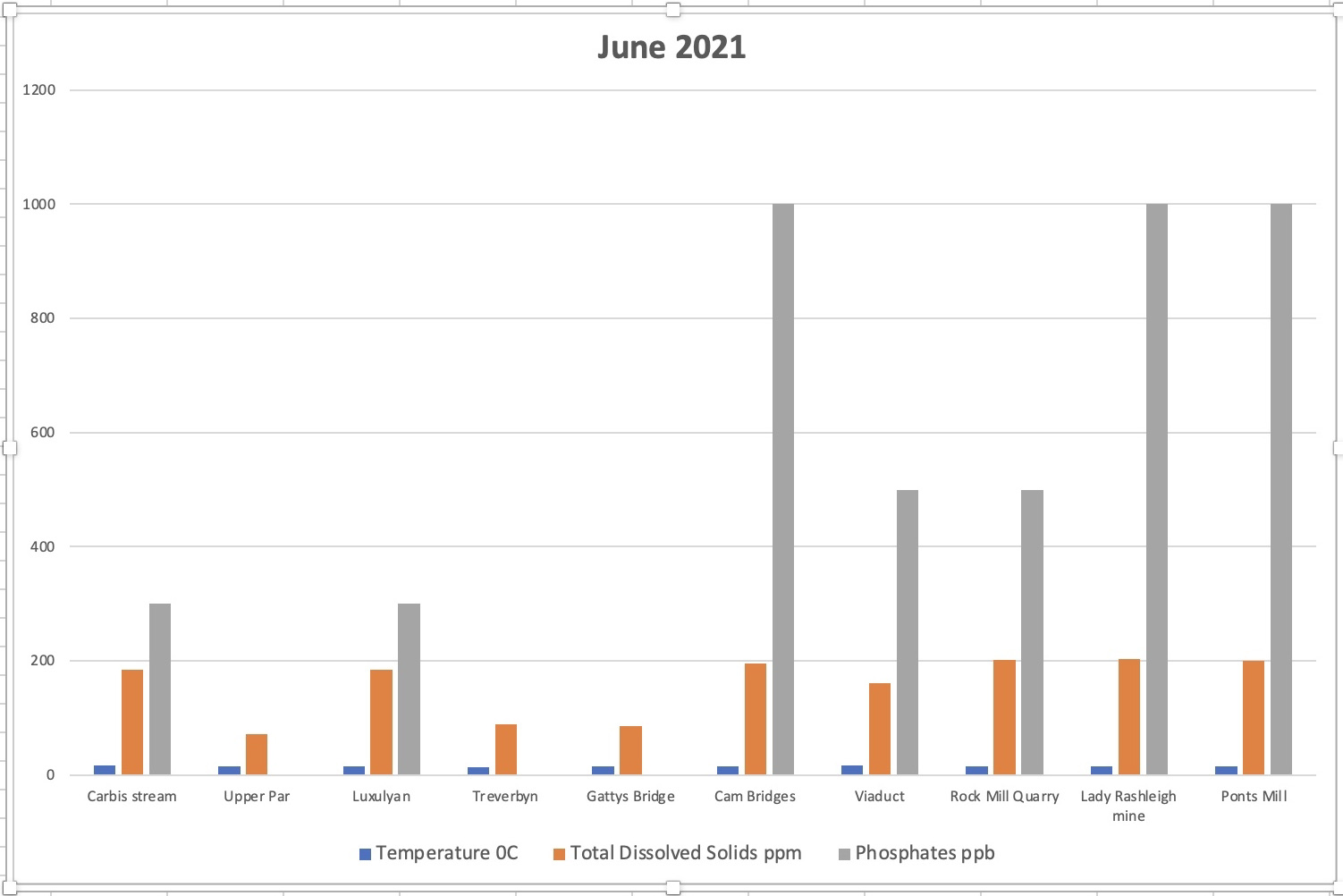 This round of monitoring occurred during a period of dry weather, with river levels average or below.

High phosphate levels were once again recorded on the main river between Bridges Moor and Middleway. Levels in the tributaries monitored did not exceed 100 ppb and were therefore not of concern.

It was not possible to determine the exact location where the high phosphate levels began, therefore it is not possible to identify the cause. Immediately downstream of Luxulyan sewage treatment works it was 300 ppb, which is high but below levels further on. A reading at Luxulyan allotments of 1000 ppb, only 316 metres downstream from the treatment works monitoring point was a large increase in concentration. Just upstream, a tributary enters on the north bank of the river raising the possibility that this was the source of the higher phosphate level and according to the Is My River Fit To Play In? website, this tributary is permitted to receive sewage discharges

There was no visible evidence of contamination, however, to test the possibility that it might be, it was decided to monitor just upstream from the allotments and the tributary. If this tributary was the source of higher phosphates, the level at this new location should be the same as at the treatment works, i.e. 300 ppb. However, the level was 500 ppb. While this does not rule out the possibility of phosphate contamination from the tributary, it does suggest that something else is raising levels below the treatment works.

So, at the treatment works, phosphate is 300 ppb; 208 metres downstream it is 500 ppb; but within 108 metres ithas doubled to 1000 ppb. The test using phosphate strips involves a judgement about the colour and shade of the water sample, so a margin of error exists. On the other hand, the judgements were made independently by two observers. While a margin of error might possibly occur within a range, there is less likelihood of it occurring between the ranges set by WRT:

So it can be stated with greater certainty that within 208 metres of the treatment works the water becomes too high in phosphates. Unfortunately the reason is unknown.

About 382 metres downstream from the allotments, at the SWW pumping station, the maximum phosphate reading of 2500 ppb was recorded on 11th June, which would suggest there is a further factor elevating the levels. Yet a reading taken on 15th June was 500. Why there should be such a variation during a period of largely unchanged weather and flow conditions, it isn’t possible to say. It must also be noted that SWW have not recorded any discharges at this point this year. A statement from them concerning the status and operation of the pumping station in response to our group’s enquiry is expected soon.

It should be stressed that although local conventional wisdom attributes the high phosphate level to agricultural practices, this group has found no evidence to support the idea. Of course, the citizen science tests are limited in scope, unsophisticated, and have not been taking place for very long, and are not set up to detect the full range of potential influences on water quality, but in terms of phosphates we have not found any connection with possible slurry or silage run-off.

Another observation relating to the Upper Par, where the river, while low in phosphates, often displays a reddish tinge, particularly noticeable when levels are low. Expert advice suggests that this may be due to iron content, perhaps a legacy of the intense exploitation of minerals, especially tin, from the streaming and mining that was conducted for centuries.

With thanks to Roger Smith who compiles our reports