It's not all bad news! 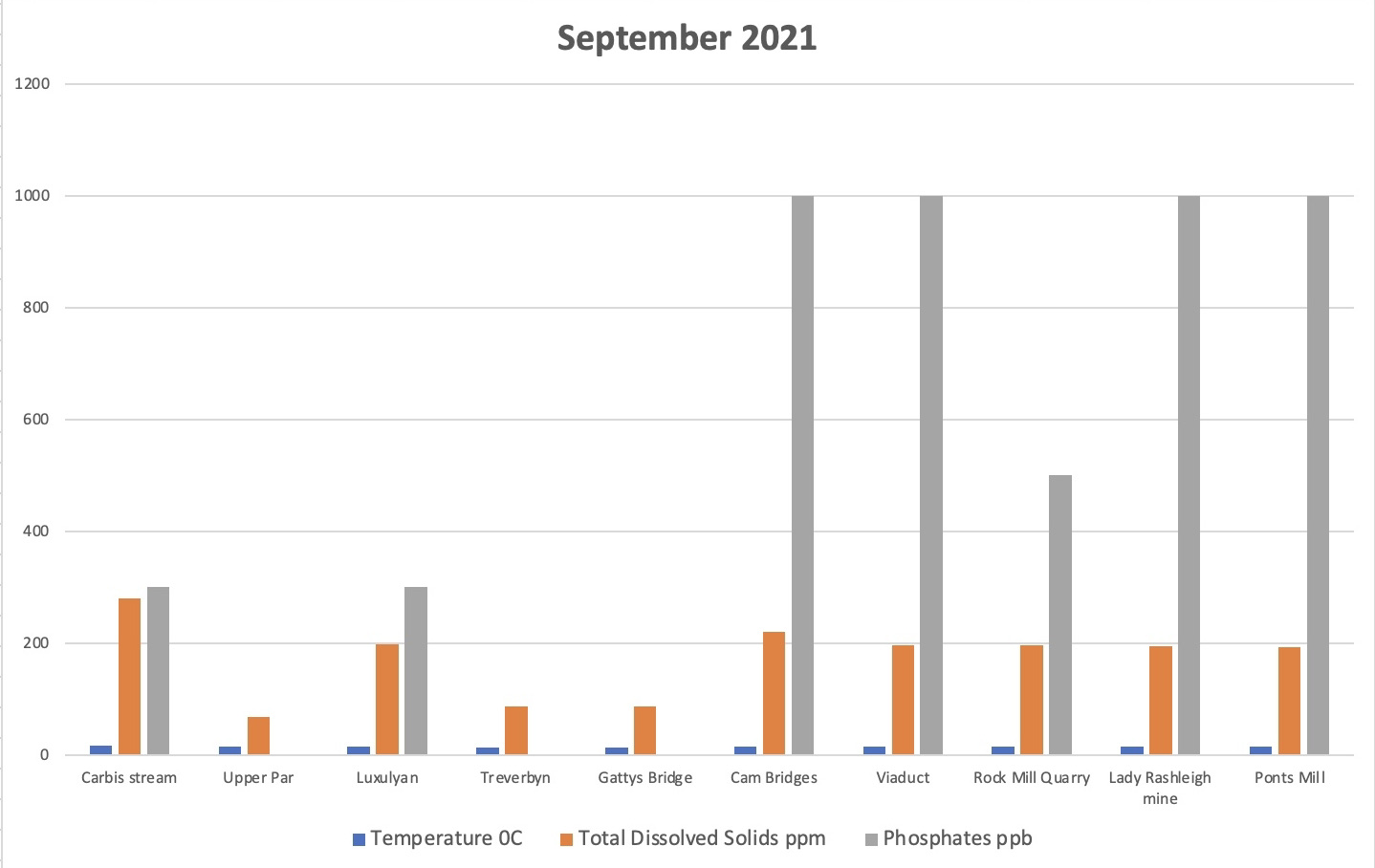 This month we monitored at 5 additional locations. Several locations that had been monitored previously in an (unsuccessful) attempt to pinpoint the source of high phosphates near Luxulyan village were dropped from the list. Two additional phosphate readings were made downstream from the Sewage Treatment Works (STW). It was not possible to monitor downstream from Ponts Mill on this occasion. An additional sampling point, on the Rosevath Stream on Criggan Moor was added.

Some key points for September:

Our CSI surveys are very simple and limited in scope and, with the possible exception of the Tregarrick Stream at Rosemullion (SX 04623 57990), where a thick layer of fine silt overlays the gravel bed, and where slurry-spreading has caused problems in the past, we have no evidence to suggest that the phosphates have anything to do with farm practices. However, the Environment Agency observations indicate this has been a problem (https://environment.data.gov.uk/catchment-planning/WaterBody/GB108048002290)  and our, very simple, methods should not be taken as a contradiction of their findings.

The Environment Agency list of reasons for phosphate pollution from their 2019 report identifies a water industry point source of continuous sewage discharge. At the pumping station downstream, any discharge into the river should only occur if the pumping machinery is not working and SWW have no record of discharges recently; therefore, it might reasonably be thought that the water industry point source is the treatment works. Certainly, this has been a major pollution source in the past. In July 2013 sewage from the works polluted the river and the company was fined £153,600. However, our results have not indicated especially high phosphate readings at our monitoring point downstream from the STW. Rather, the high readings seem to begin a short distance further downstream at the allotments.

It was suggested to the group the best place to monitor might be further from the outfall, so it was decided to try phosphate testing approximately 5 metres and 15 metres downstream from the usual monitoring point near the STW. Interestingly,  the results were even higher, 500 to 1000 ppb. Very puzzling!

Additionally at the suggestion of David Edwards, of Roche, we added a sampling point on the Rosevath Stream. Our monitoring point was very close on Criggan Moor to the point on the Bissa (Upper Par) where we already monitor, where the reddish tinge to the water is a sign of metal pollution from generations of tin-streaming and mining in the area. The Environment Agency ascribes the failure of the Upper Par to reach 'Good' status to 'Physical Modifications and Abandoned Metal Mines', so sampling here might show if any changes are occurring. It was not a surprise to be told by the landowner that her family have always referred to this as the ‘Brown’ or ‘Ochre’ river, but there were no phosphates detected in our sample.

Phosphate levels may remain high, but our monitoring has prompted investigation by the EA and SWW and instigated some outfall repairs at the pumping station that might otherwise have gone unnoticed. There is further good news in that there are no observations of excessive plant growth (due to pollution), there have been small fish seen in the upper Par and there are consistent and recent signs of otter activity along the river. However there is always more to do!