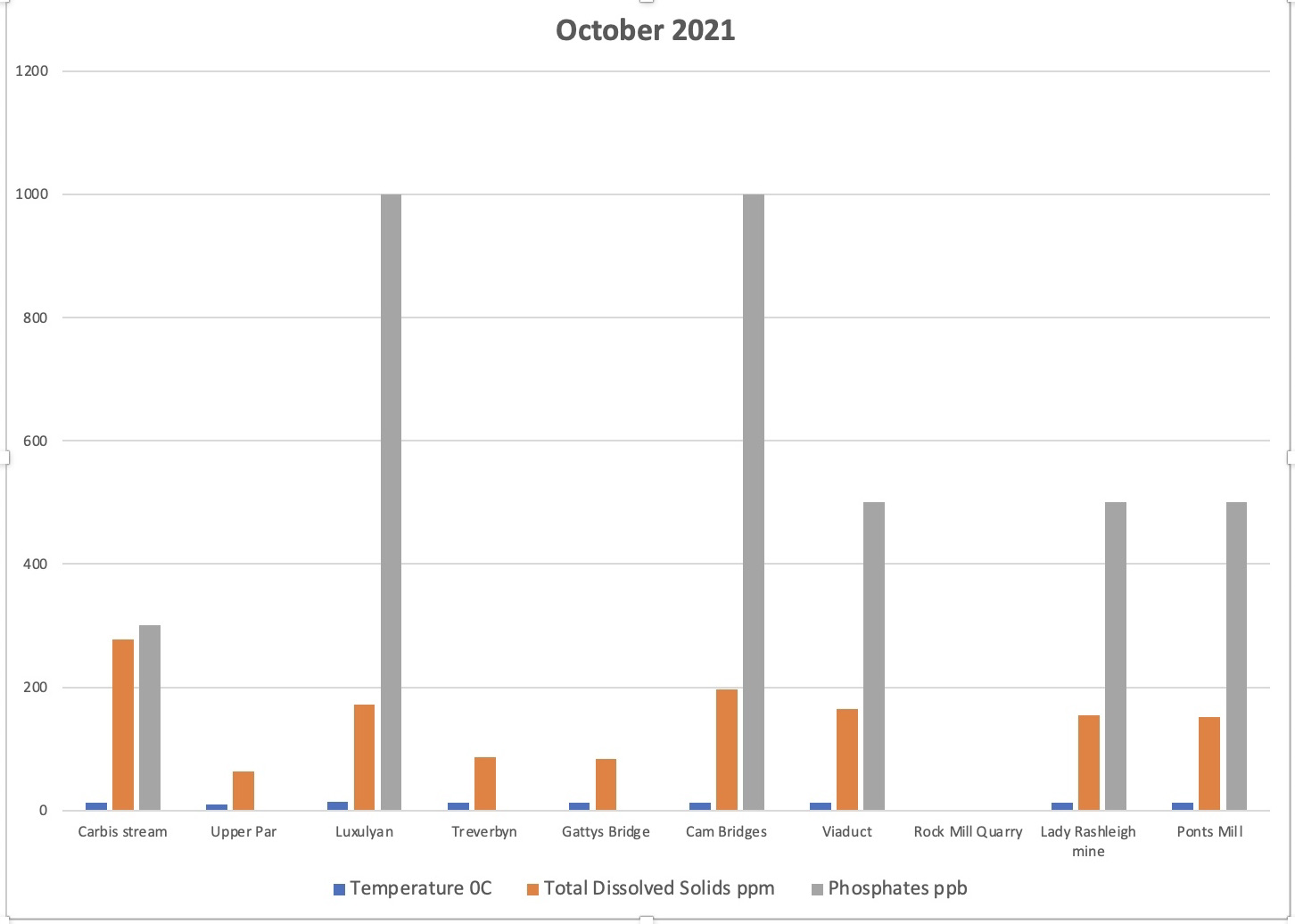 This month we will look only at the matter of very high phosphate levels in the Par River in the vicinity of the St Austell North (Luxulyan) Sewage Treatment Works. This is not to say that South West Water is the cause of this problem, although the Environment Agency is exploring this possibility with them.

Our group has noticed that phosphate levels only become seriously elevated downstream from the STW, yet at the usual monitoring point readings have never been of great concern (see graph in 4 (a) page 21 above); however, levels between there and the allotments have been markedly higher. Last month we became aware of two outfalls from the STW: 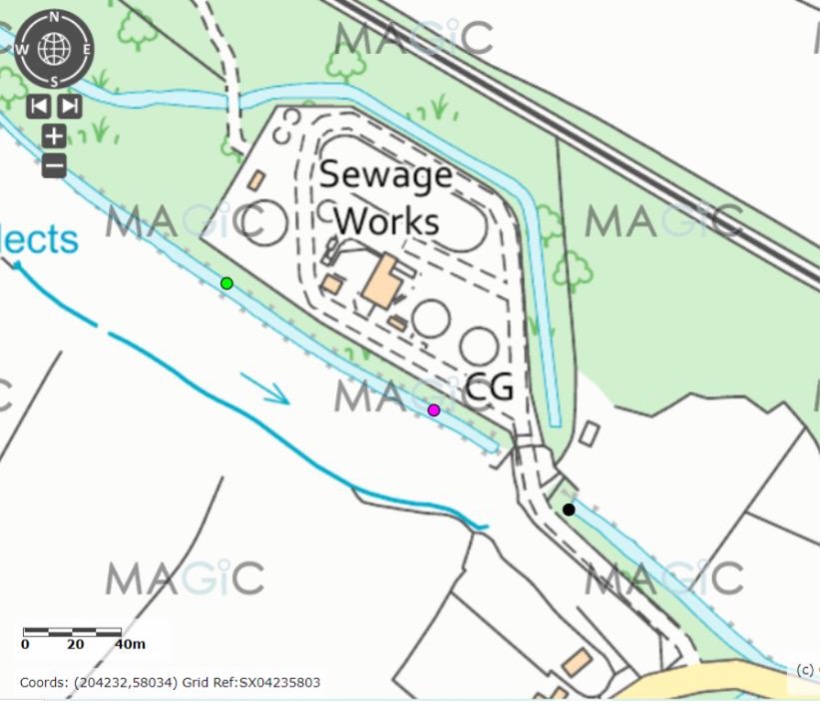 Green dot Storm Effluent discharge point (Outlet 2 at SX 0432 5820). This should not be operational in dry weather.

We have attempted to find other watercourses and factors that might have had an impact on phosphates (see previous reports), including the impact of farm slurry and other sewerage arrangements. None of them could be shown to have any effect on the river. This left the STW as the only possibility that we could think of. Special mention must be given to Joan Farmer for initiating a far more intensive investigation of the vicinity of the STW.

On Saturday 9th October 2021, a sample was taken at the final effluent discharge point at SX 0440 5815 (purple dot in map above). (Overhanging vegetation made it impossible to go upstream of the Storm Effluent discharge point at SX 0432 5820, which during the dry spell ought not to have been active anyway.) A low phosphate reading here would show there was no problem upstream from the STW. This was the case: it was 100 ppb.

After recording 300 ppb at the usual monitoring spot at SX 0455 58114 (black dot in above map) it was decided to take a reading from water taken mid-river about 10 metres downstream. This is shown approximately by the yellow dot in the next map: 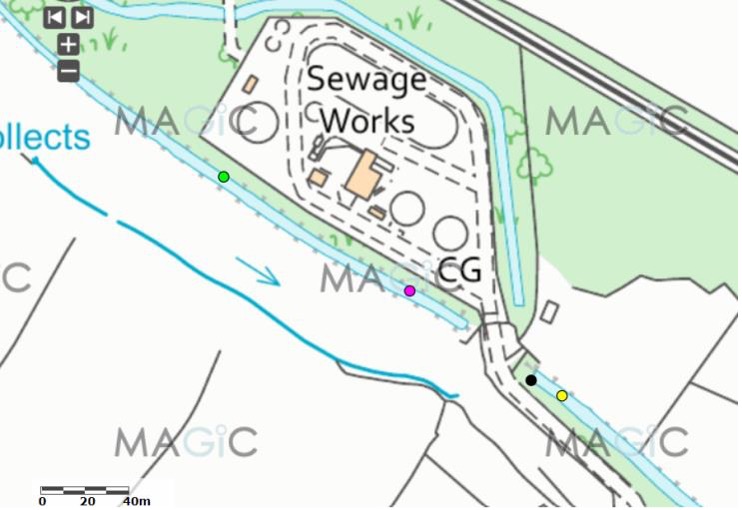 This time the maximum possible reading using our kit was made: 2500 ppb.  No tributaries enter in this stretch. On one side is a field and on the other a belt of bushes and trees. In other words, there was no obvious source of contamination.

At first we couldn’t understand how the readings went from 300 ppb to 2500 ppb in such a short stretch but then realised that readings at our usual spot might have been diluted by water from 2 small outfalls draining local fields entering the river a metre from our position.

To test this idea we sampled river upstream of the twin outfall, and usual monitoring position, under the downstream side of the bridge. This gave a reading of 500 ppb. Something downstream of the bridge had to be the cause of the 2500 ppb reading. The only visible candidate was the large outfall which has been a mystery to us ever since we began monitoring in this location: 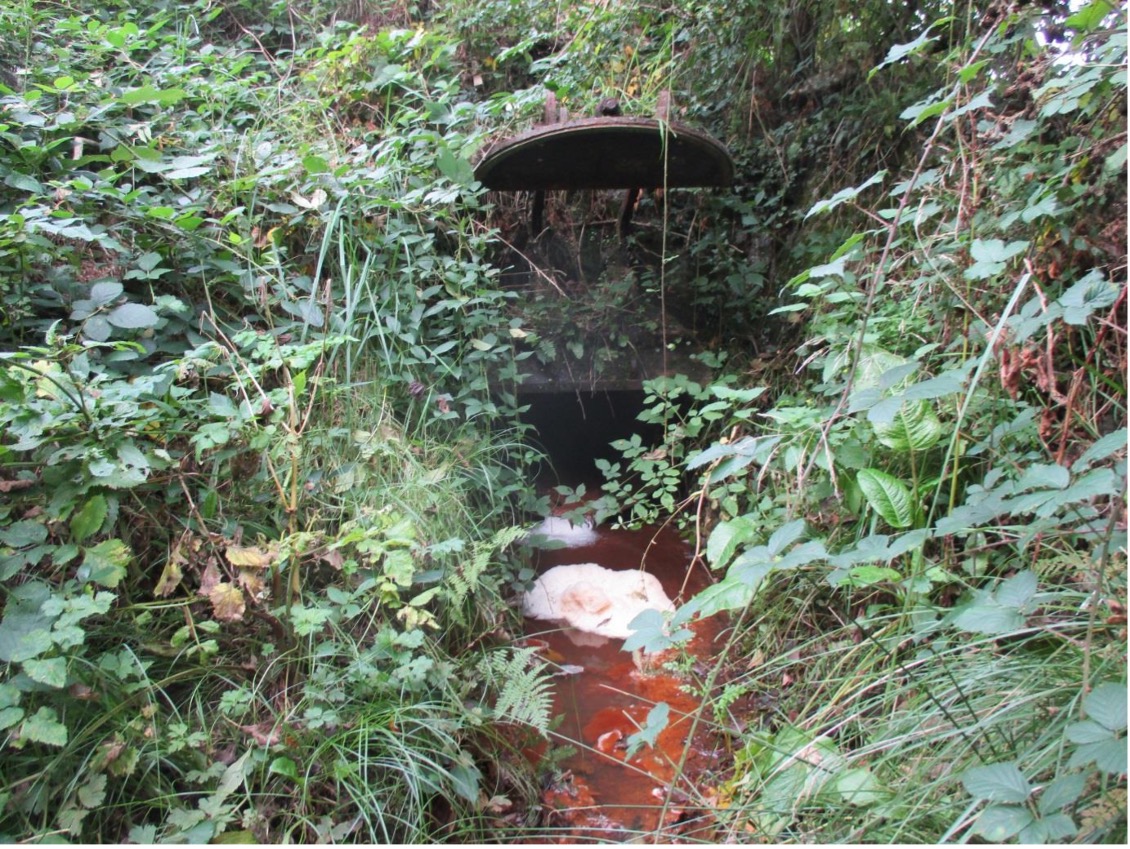 This outfall has a metal hinged flap that is permanently open. We have never observed large volumes of water emerging from it, although sometimes, as was the case on this occasion, small amounts of foam and a reddish tinged liquid emerges. We don’t know its purpose, but its position suggests it is the outfall from a water channel that flows around the northern perimeter of the STW

It seemed as if the high phosphate level was the result of something emerging from the large, unexplained outfall at SX 0447 5811. Given the very high levels the Environment Agency hotline was contacted later on Saturday 9th October. Information was also sent by email. Shortly after a very helpful conversation with the official manning the hotline for the Cornwall section rang me. On Monday 11th October the following message was received from the EA:

'SWW have investigated the report and did not find any issues on site and do not currently have a phosphate limit as part of the Environmental Permit for the sewage treatment works in question. However, within the Environment Agency, we are still exploring what drains into the channel described in your report as the ‘large diameter outlet pipe’ and how this flows through the sewage treatment works. I can confirm that [a colleague] has followed this up further with South West Water. In addition, a colleague went out earlier in the week to undertake some sampling and I thought you would be interested in the results.'

Looking at those sample results, the higher phosphate reading seems to be linked to the final effluent from the sewage treatment works as it is highest in the sample taken downstream of the effluent entering the river. It may be that the flow from the outfall in question is higher at certain times but was quite low flowing when the sample was taken. It may be interesting to compare the EA results with the results obtained by our group. It therefore looks more likely that phosphate levels are linked to the final effluent discharge point rather than the mystery outfall, although investigation continues.

Further investigation by the EA and SWW should yield more information. It is concerning that no phosphate limit is stipulated in the Environmental Permit. Ammonia levels were also included presumably because it is of significance, but as a CSI group we lack the knowledge required to make any comment.

On a general point, it is noticeable that in the media, concern is increasingly being voiced about the poor quality of Britain’s rivers. This is not the fault of the Environment Agency; rather it is the direct result of swingeing cuts in funding for the agency since 2010. Our group’s experience is that the EA provides a swift, encouraging and helpful response whenever the alarm is raised and information supplied and we are grateful to them. The growing partnership between the WRT and EA gives hope for the future of Britain’s rivers but sooner or later the politicians must act.