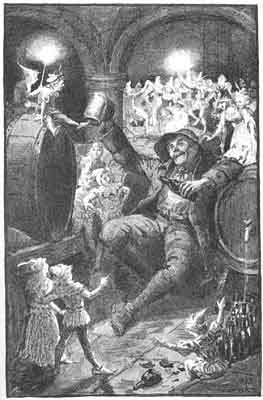 Written by Taken from sacred-texts.com

On the Thursday immediately preceding Christmas-tide (year not recorded) were assembled at "The Rising Sun" the captain and men of a Stream Work  2 in the Couse below. This Couse was a flat alluvial moor, broken by gigantic mole-bills, the work of many a generation of tinners. One was half inclined, on looking at the turmoiled ground, to believe with them that the tin grew in successive crops, for, after years of turning and searching, there was still enough left to give the landlord his dole, and to furnish wages to some dozen Streamers. This night was a festival observed in honour of one Picrous, and intended to celebrate the discovery of tin on this day by a man of that name. The feast is still kept, though the observance has dwindled to a supper and its attendant merrymaking.

Our story has especially to do with the adventures of one of the party, John Sturtridge, who, well primed with ale, started on his homeward way for Luxulyan Church-town. John had got as far as Tregarden Down without any mishap worth recording, when, alas I he happed upon a party of the little people, who were at their sports in the shelter of a huge granite boulder. Assailed by shouts of derisive laughter, he hastened on frightened and bewildered, but the Down, well known from early experience, became like ground untrodden, and after long trial no gate or stile was to be found. He was getting vexed, as well as puzzled, when a chorus of tiny voices shouted: "Ho I and away for Par Beach!" John repeated the shout, and was in an instant caught up, and in a twinkling found himself on the sands of Par. A brief dance, and the cry was given: "Ho! and away for Squire Tremain's cellar!" A repetition of the Piskie cry found John with his elfish companions in the cellars at Heligan, where was beer and wine galore. It need not be said that he availed himself of his opportunities. The mixture of all the good liquors so affected him that, alas! he forgot in time to catch up the next cry of "Ho! and away for Par Beach!" In the morning John was found by the butler, groping and tumbling among butts and barrels, very much muddled with the squire's good drink. His strange story, very incoherently told, was not credited by the squire, who committed him to jail for the burglary, and in due time he was convicted and sentenced to death.

The morning of his execution arrived; a large crowd had assembled, and John was standing under the gallows tree, when a commotion was observed in the crowd, and a little lady of commanding mien made her way through the opening throng to the scaffold. In a shrill, sweet voice, which John recognised, she cried: "Ho! and away for France!" which being replied to, he was rapt from the officers of justice, leaving them and the multitude mute with wonder and disappointment.