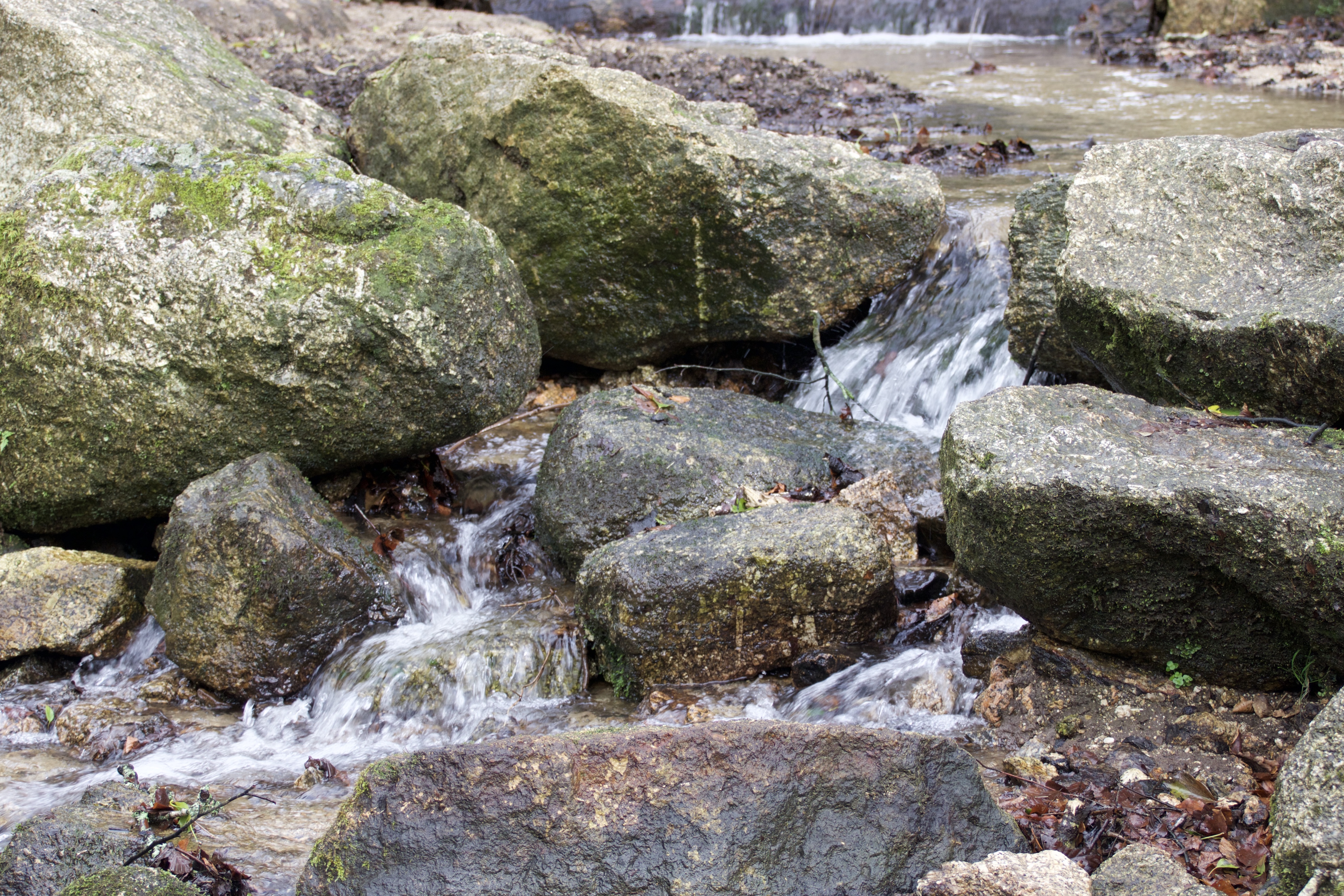 Written by Sue Perry with thanks to Chris Tigg

Another lockdown, but not so dry and sunny this time! The Valley has been busier than ever as more people venture further afield, go to places they might not otherwise go to enjoy the calming effects of Mother Nature. Unfortunately, not all visitors walk, observe and enjoy. We were dismayed to learn at the last Trustee meeting that there had been a serious fly tipping incident. One of our ‘visitors’ went to a lot of trouble to dump a single bed and its mattress, not just at the side of the road, but going to the extra length of pushing it into the middle of the river, where it is more problematic for authorities to clear. We can be really thankful to a Friend and a friend of a Friend who took it upon themselves to remove the mattress and bed, which cannot have been an easy undertaking. We are lucky to have such people in our midst.

A less shocing but perhaps more damaging disturbance occurred at the waterfall adjacent to the Fowey Consols leat. I could call it vandalism; I suspect it was done without malice, but definitely without care or consideration for the consequences. There have been several similar incidences over the summer, but the most serious and determined destruction occurring during the last half term school holiday. In the words of our ranger Jen, they have ‘moved every possible stone they could, even quite big stones this time, causing erosion under large rocks and upstream’. It must have been the work of many hands and some considerable strength, an organised effort to displace such large granite boulders. It took Jen and her assistant Don hours of hard work to retore most of the stones, but heavy machinery will be required to re-instate the waterfall as it should be. All of which costs money, tax-payers money, but also our rangers’ valuable time, which is so needed all across the Valley and at many other sites across East Cornwall. 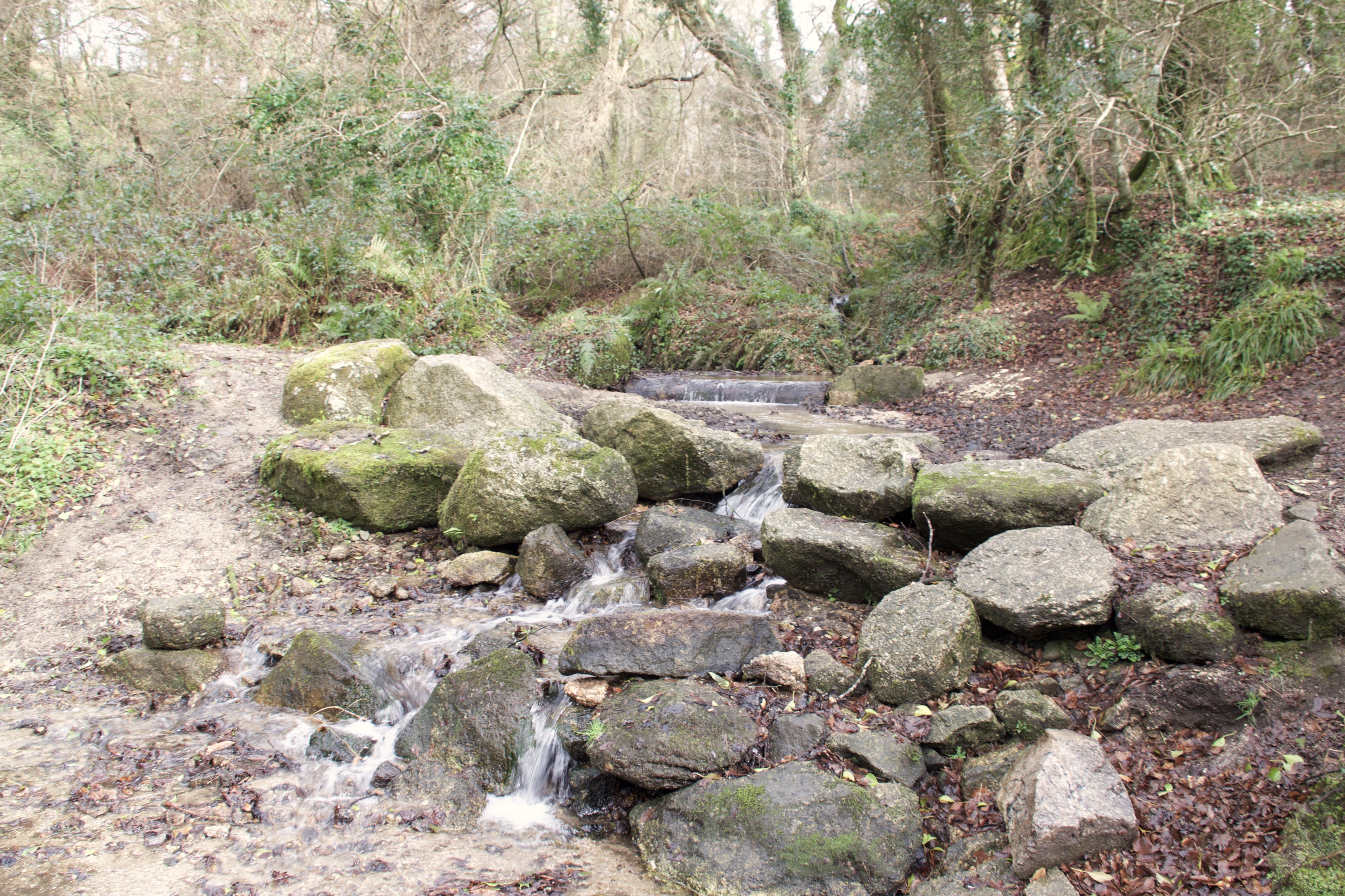 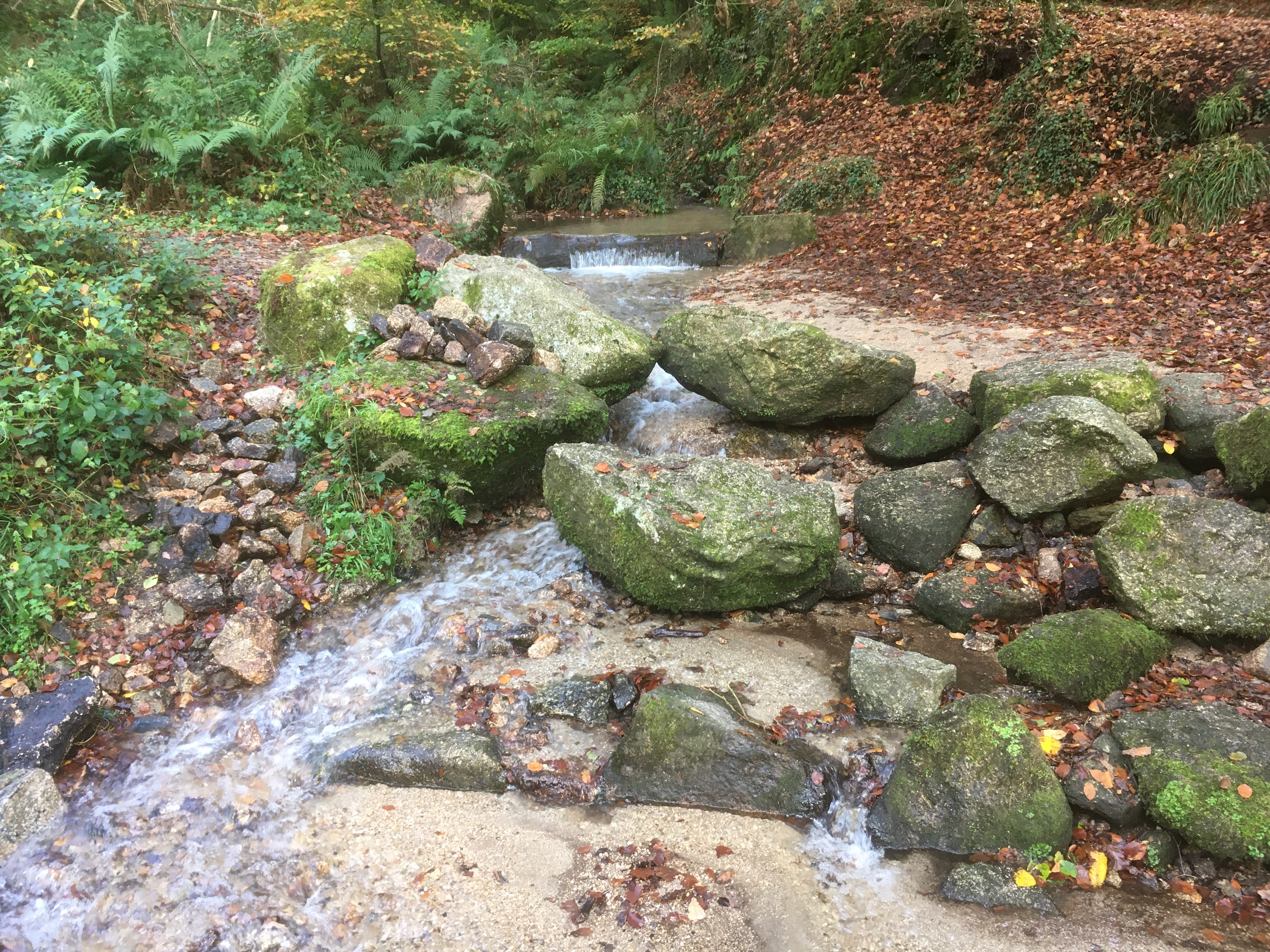 Loss of ranger resource is not the only issue here; the whole Valley’s story is about controlling the flow of water, and very little of it is as Nature would have designed it. Actually, the waterfall is not that at all, it is a silt trap for the Trevethy stream. Before its creation, silt and gravel would pour down the stream during heavy rain and be deposited into the leat. The idea was to create two traps, one behind a large tree log upstream and one behind the large granite boulders at the edge of the leat. Silt now builds up behind the tree log, whilst any overtopping silt is deposited behind the large boulders. Periodically the silt should be dug out to maintain the two pools and minimise silt ending up in the leat. 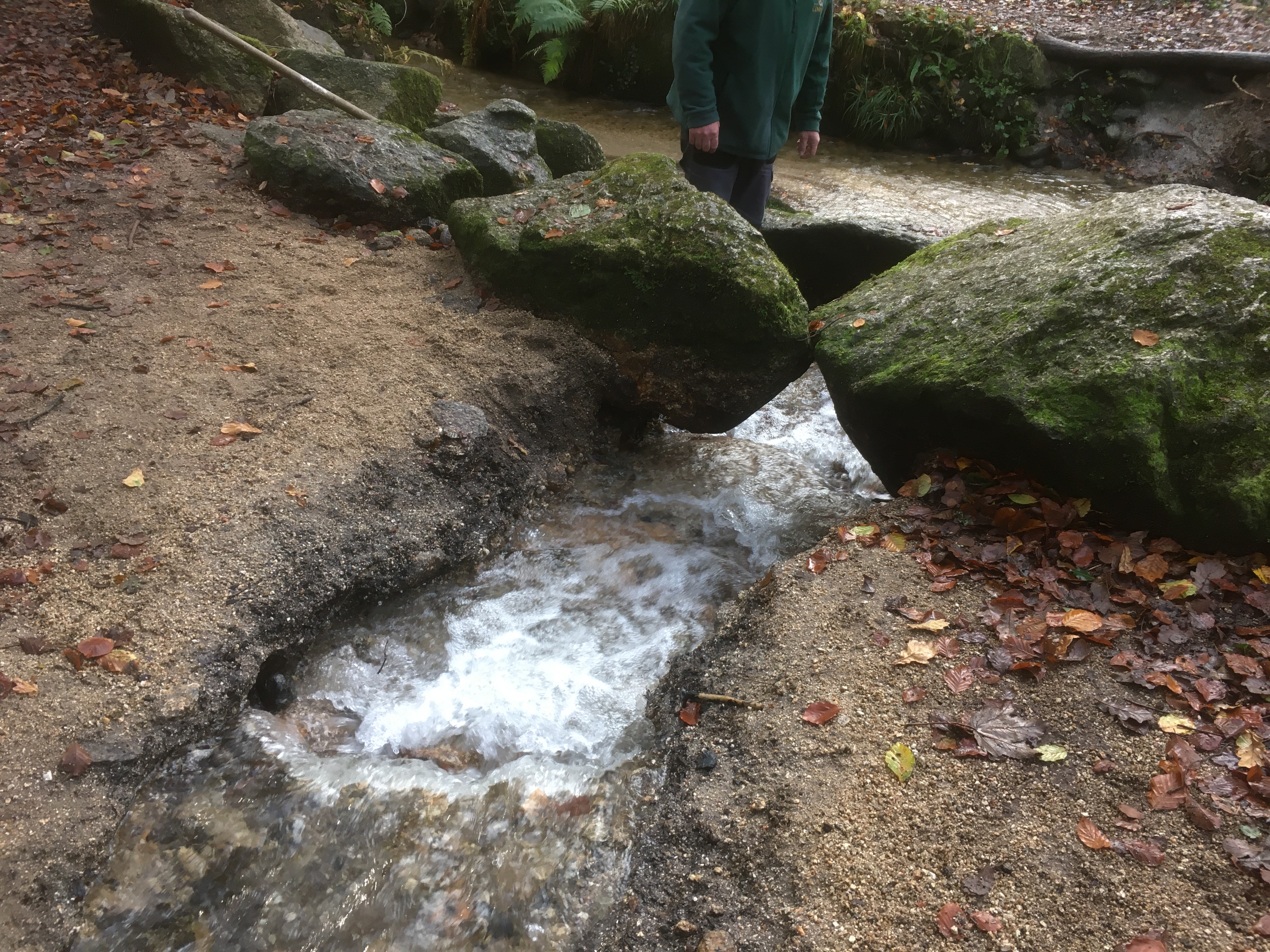 Erosion above the waterfall

Undermining the large boulders therefore destabilises them and risks them moving, particularly if pushed or stood on. Displacement of so many other, smaller stones means the water flows unobstructed, traveling with much greater force that can erode the stream bed and wash more silt into the leat, which is already in need of dredging. In addition, the leat bank opposite the outfall will be more prone to erosion that will in turn undermine the path. Faster water flow also affects upstream as it causes soil erosion there, where it can least be afforded and where the delicate ecological balance can suffer.

It may not be obvious, but the waterfall is also a significant landmark for many local people, as it is dedicated to the memory of one of the Valley’s workers and supporters, Graeme Miller, who helped to install it. Graeme became involved in the FoLV over 12 years ago when he began working with the Ponts Mill Community turbine project monitoring the leats in the valley. For several years Graeme could be seen walking the leat system with his dog twice sometimes three times a day. Most of this time he worked closely with Peter Trebilcock and they formed a strong friendship. As soon as a leak appeared, they would just get on and fix it. He and Peter cleared the sluice gates, monitored water levels, cleared fish screens, repaired leat banks and serviced the turbine. When Cormac took over the maintenance of the Valley, they kept Graeme on with James Clapp, the then ranger with whom he got on with extremely well. Sadly, Graeme was forced to give up work due to ill health and when he passed away in 2016, a Friend muted the idea of placing a seat at the waterfall. His once colleague, James insisted on making the bench and it was installed by Jen, our current ranger and dedicated to the memory of Graeme. 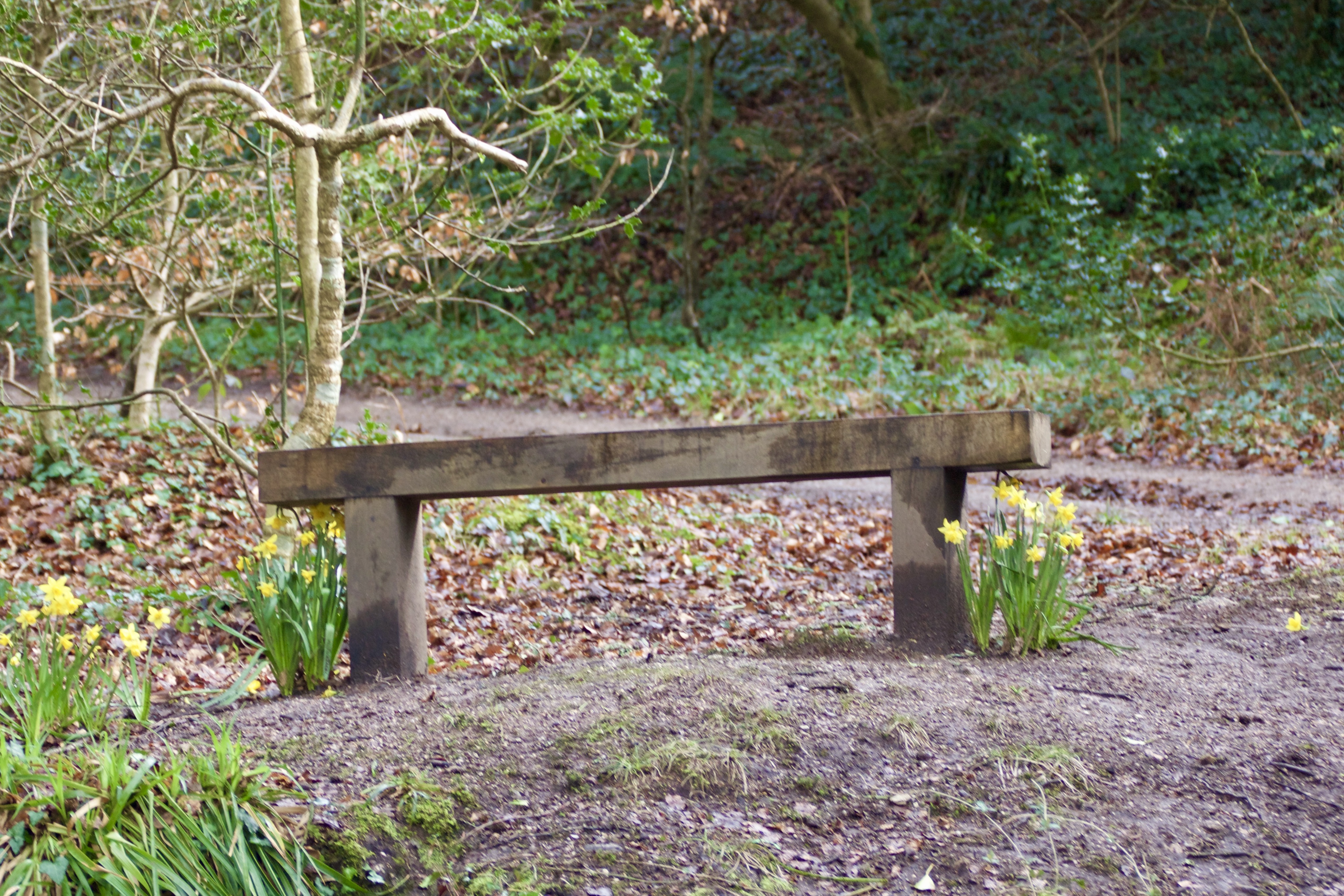 So, while we wait for funds to become available to make a safe repair, we can all be more observant of what’s happening in the Valley; whether we see someone using the leat paths for cycling, damaging trees (a frequent problem) or dismantling the waterfall and if it feels safe to do so we should gently challenge such inconsiderate behaviour and try to educate about the ramifications. If it does not feel safe to talk to those involved, we should do our best to collect any information that might be useful to the authorities, especially regarding fly-tipping; registration numbers are invaluable in helping to trace perpetrators.  And we can all help by reporting any issues such as fallen trees or water leaks to ranger Jen at: jenny.heskett@cormacltd.co.uk

As previously mentioned the Valley does not look after itself; Jen and Don are there at least twice weekly to check the leats are clear, check the sluice gates have not been tampered with, repair leaks, keep paths safe and clear and manage the woodland and pastures to improve biodiversity and protect the industrial heritage. Their workload is high, especially at the moment while Covid 19 has stopped all volunteer work parties, but as Friends of Luxulyan Valley, we can remember that everywhere in the Valley has a story to tell and we should all play our part in keeping it looking its best for all to enjoy in these unprecedented times when we need nature to calm our thoughts and soothe our souls.