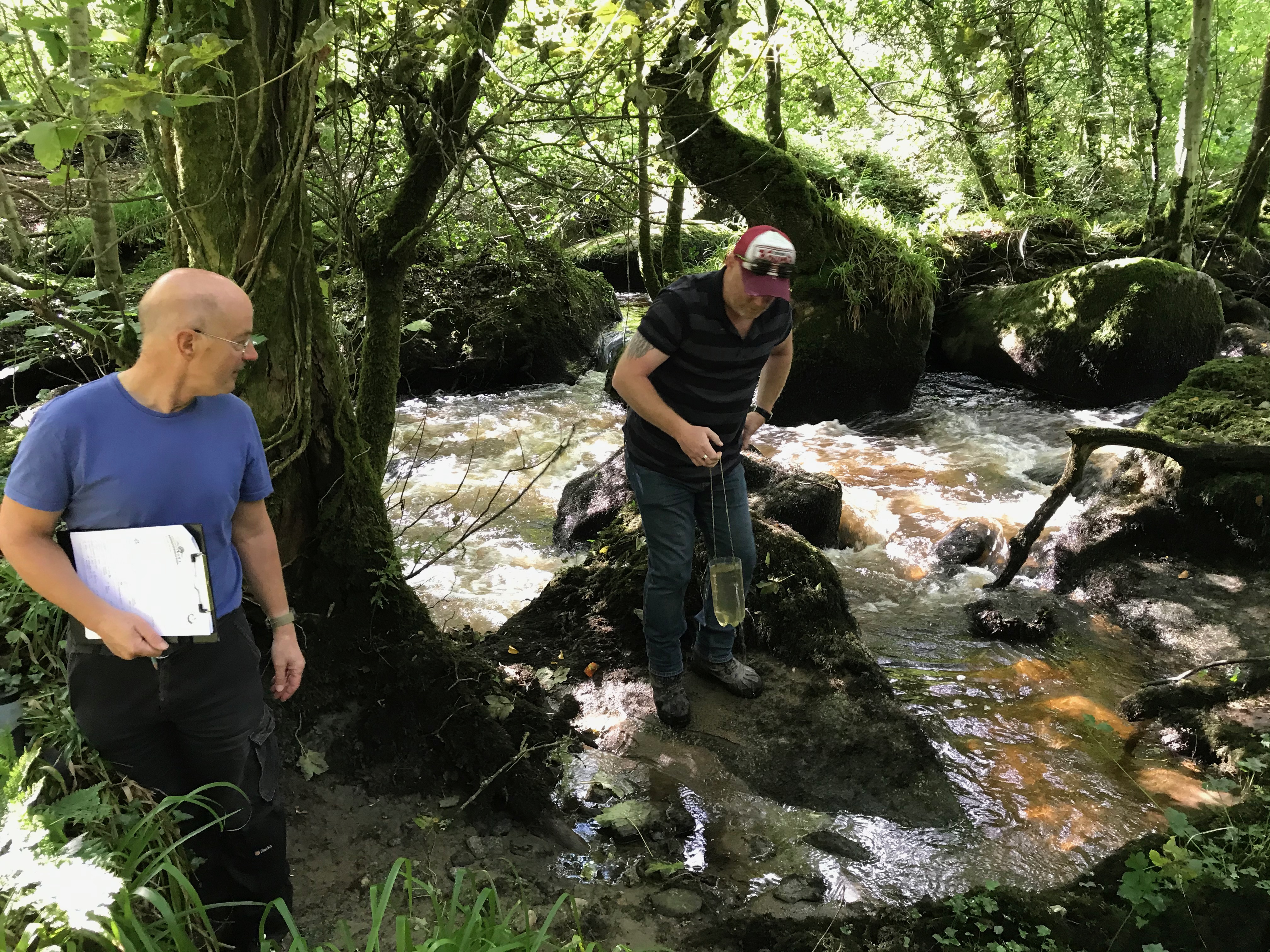 Now, I’m really going to show my age, but whenever I hear the phrase ‘Citizen Scientist’, I can’t help but think of Robert Lindsay’s character Wolfie from the late 1970s comedy, Citizen Smith. An unemployed idealist, Wolfie tried to imitate his hero, Che Guevara by forming a somewhat unsuccessful ‘Tooting Popular Front’ movement. Although Wolfie never quite returned ‘power to the people’ (his favourite motto) Citizen Scientist programmes actually do just about that, empowering local people and hopefully making a difference.

Funnily enough, we have our own Citizen Smith, Roger Smith, and he co-ordinates the Valley’s water monitoring group for the  Westcountry Rivers Trust . An amazing charity launched back in 1994, Westcountry Rivers Trust (WRT) was formed on the back of a pub conversation by a group of concerned individuals alarmed by the deteriorating condition of the Westcountry’s rivers and streams. The WRT have since been dedicated to restoring and protecting our Westcountry waterways, using a holistic approach that considers the whole water catchment area rather than just individual rivers. They use evidence-based methods to monitor water quality and organise projects that collaborate with businesses, landowners and communities working towards improving the health and the wildlife of our local rivers. 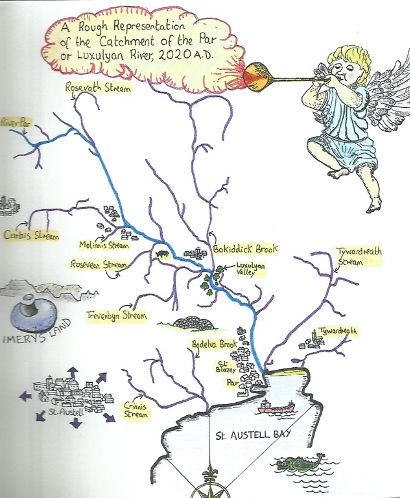 As our own Citizen Smith is also our otter spotting group co-ordinator, it was natural to be curious about the health of the River Par supporting them, so when he suggested the Friends start a group to monitor its condition, Linda, Mandy, Dave, Joan, Veronica and I were quick to sign up. We were given training, equipment and lots of support from WRT to get started and monthly monitoring began in earnest this July.

Our last monitoring was on a beautiful sunny Sunday, which just happened to be World Rivers Day . The Valley was looking its charming best as we walked its length from Gatty’s Bridge to Ponts Mill to cover all 5 monitoring points. Once in position, each location is surveyed for its character, surrounding ecology including any wildlife or invasive species, its flow, water level, any evidence of pollution, its depth and width and of course its water quality. Water quality is assessed by measuring temperature, the number of dissolved solids (no explanation needed), turbidity (clarity) and phosphate levels.  Photographs are taken each time from the same points plus anything of concern. The results are entered onto a central database and published once approved by the WRT. Any abnormal readings need to be considered with regard to the source of the water being monitored and the streams that feed into it and whether they run alongside sewage treatment works, farmland or industry. Analysis therefore, is not as simple as it may appear and this is left to the experts.

One thing about the Citizen Scientist programme is that it’s not just a paper exercise; WRT look at every result, provide feedback and encourage reporting of abnormal results to the appropriate authorities, usually the Environment Agency. Even if no action is taken, the database comprises a huge amount of information and evidence about the condition of our rivers that can always be called upon. This month we found the phosphate levels were higher than normal, which is a concern; without volunteers carrying out testing, such occurrences would go undetected and unrecorded.

To a casual observer we may appear to be an odd group of people standing around the riverbanks in wellington boots with clipboards, test tubes, turbidity gauges and testing pots. While the science is serious, it’s a great excuse to spend a few hours in our incredible Valley and getting off the beaten path, perhaps discovering an overgrown boundary stone or happening on some late flowering angelica (identified by Joan); but it is also fun spending time with like-minded individuals, swapping thoughts, ideas, knowledge and experiences about the Valley or life in general. Ingenuity is sometimes required, such as Dave’s home-made water sampler complete with anti-overflow mechanism (leak) or Joan’s collapsing measuring stick. We are learning and improving as we go along. A certain agility is also required to navigate some of the large granite boulders and attempts to estimate river depth and width can result in some interesting poses and positions. Having said that, we normally leave this task to Roger, who can leap around the riverbanks like a young otter. 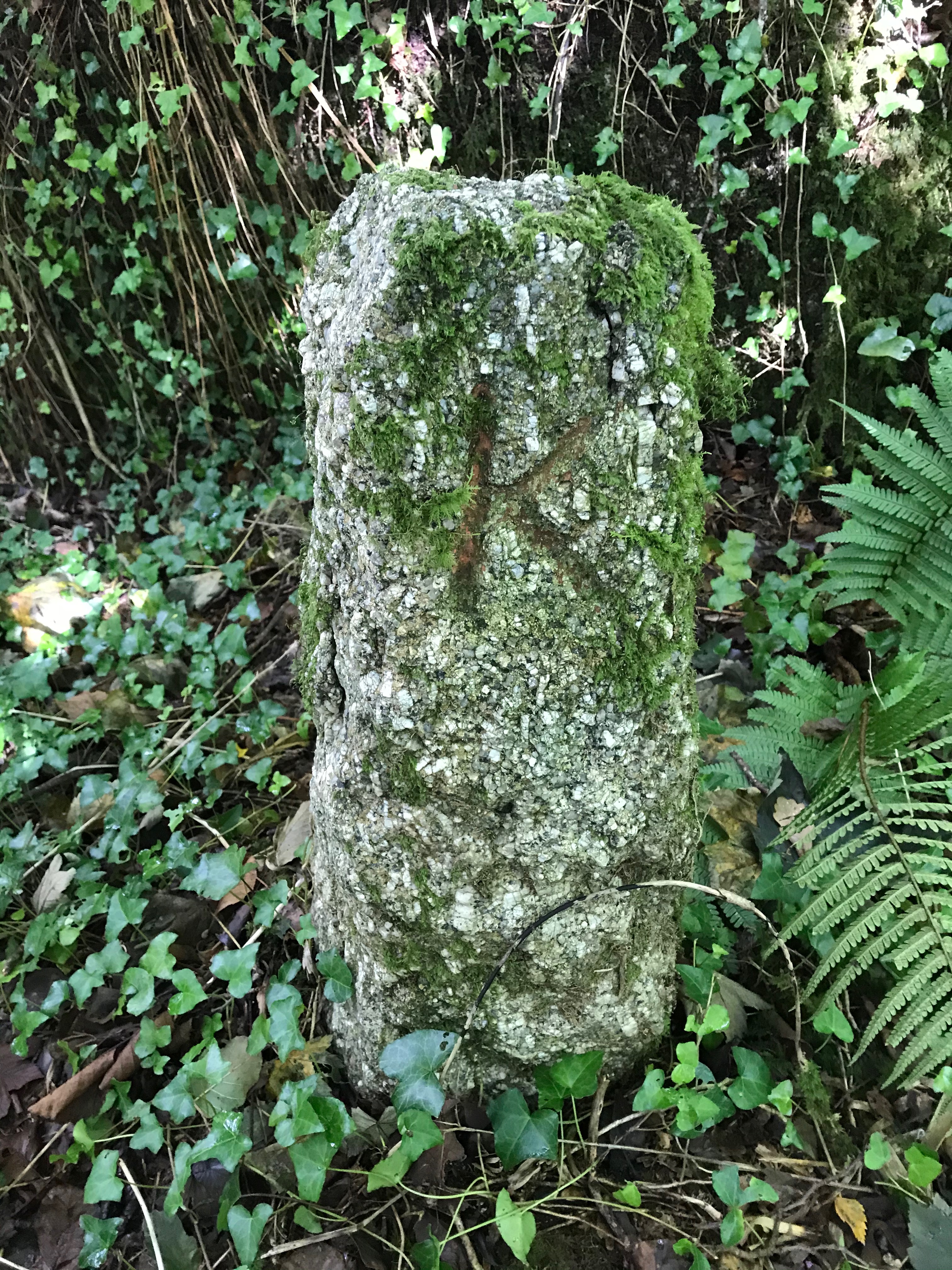 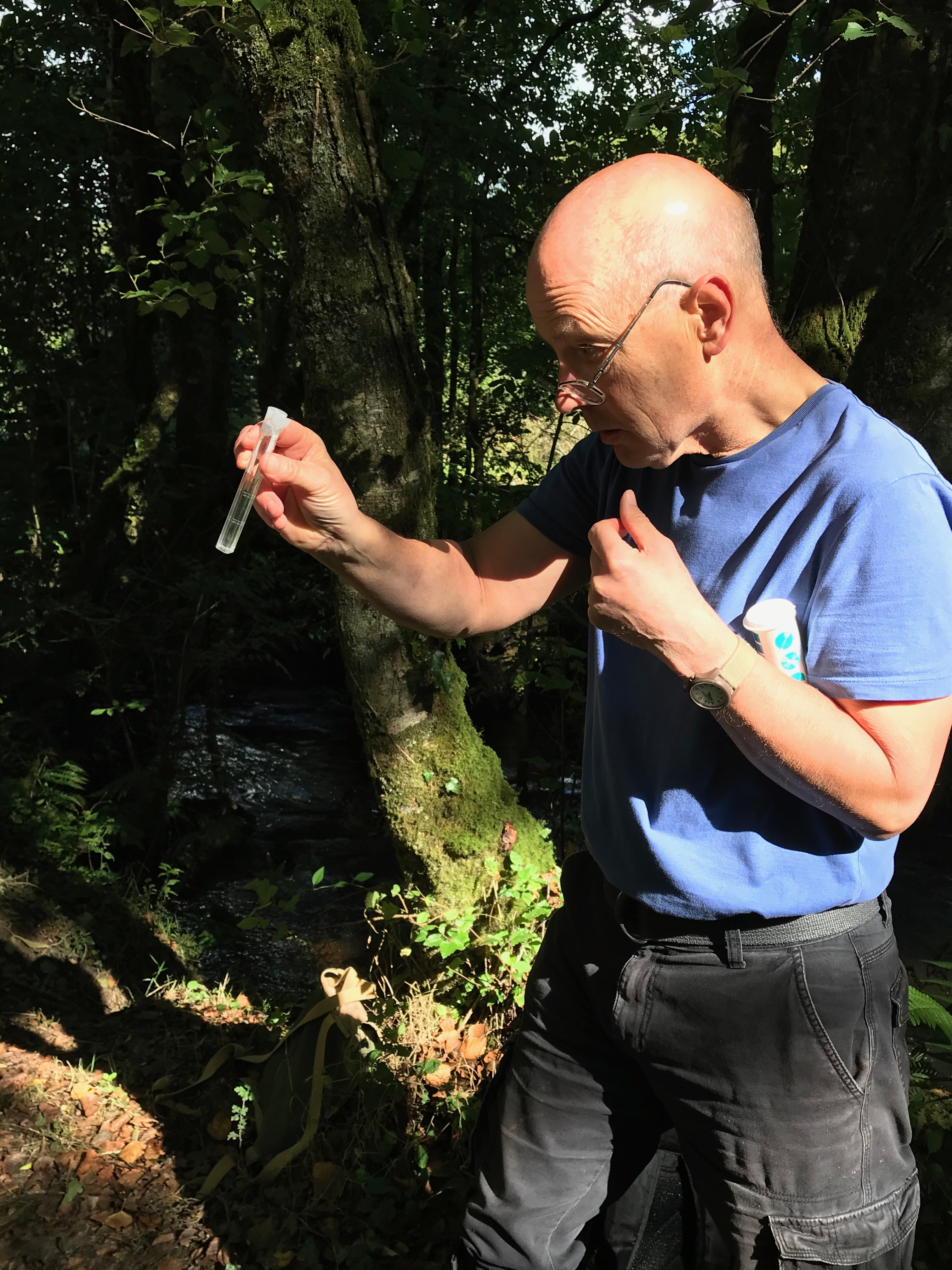 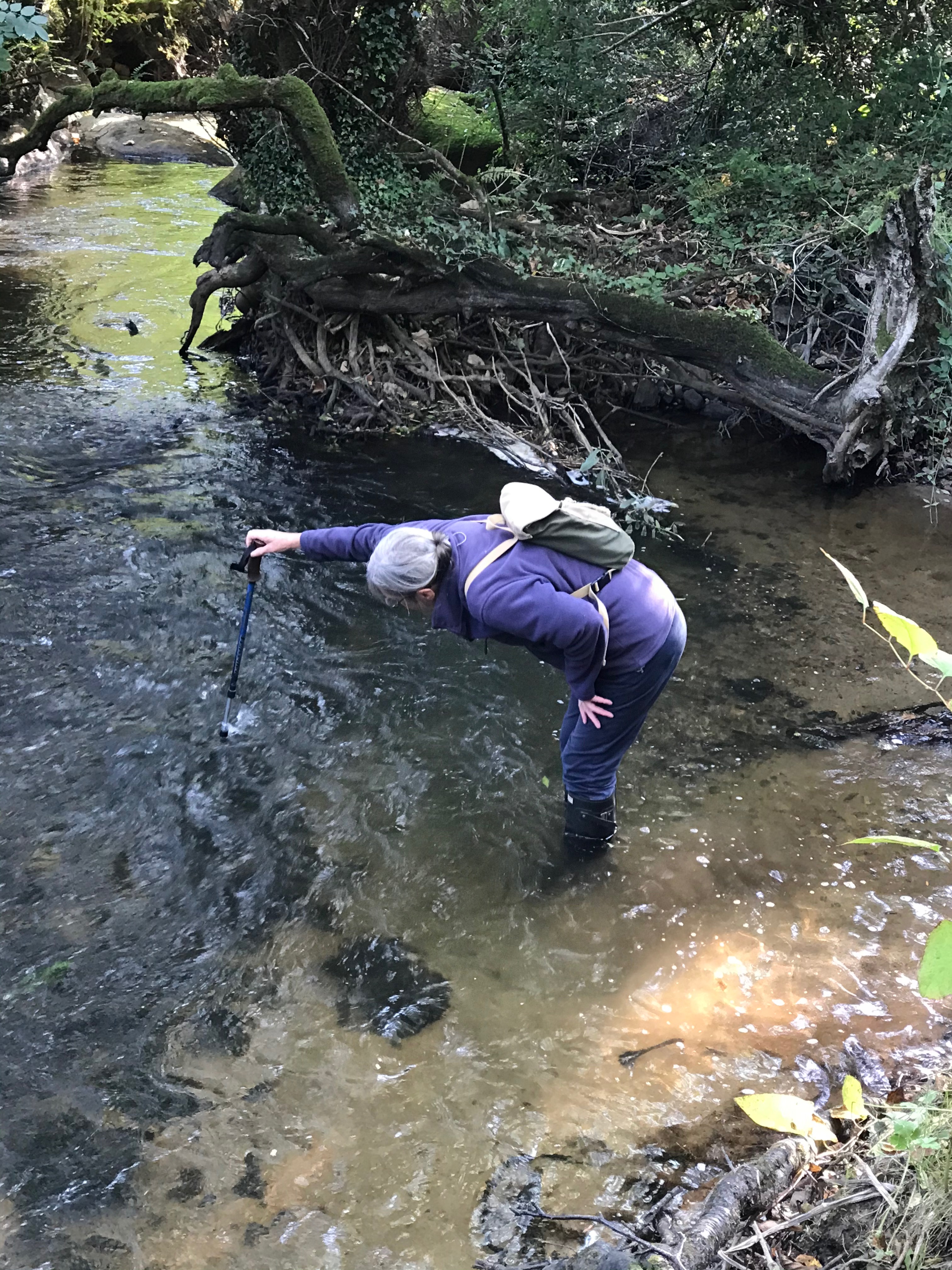 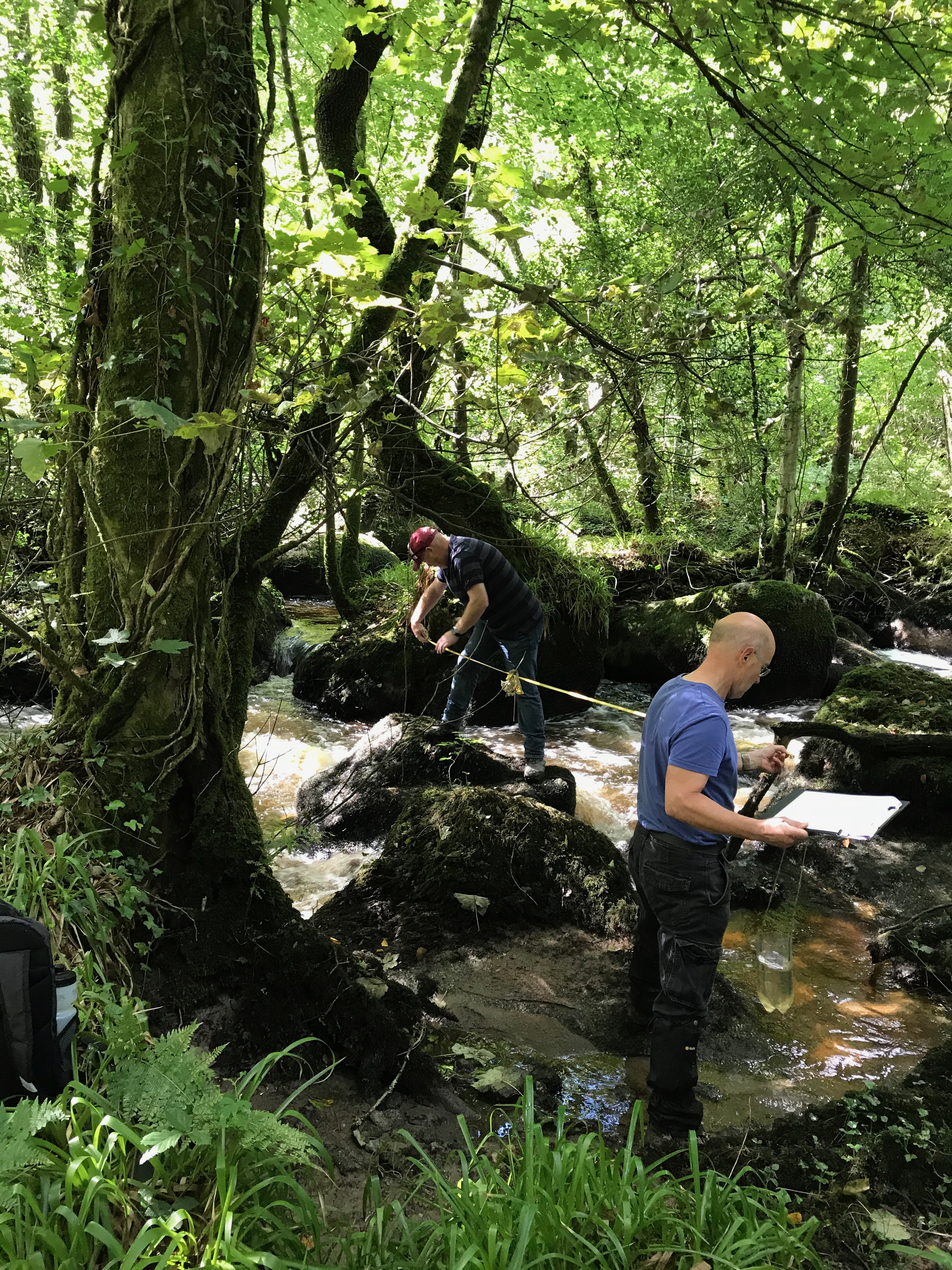 Talking of otters, spending time in the Valley always provides opportunities to find the unexpected, but none of us, not even those of us that go otter spotting, ever imagined we would happen across a real live otter!! We know they inhabit the Valley as we regularly find their spraint (well, when I say we, I mean Roger, our expert otter spotter) but they are shy creatures and rarely seen, especially at lunch time! But as we took a small detour to admire the recent bank improvements under the StARR project, we heard a splash and saw something falling into the water, a branch or a duck maybe, but as it surfaced with its sleek tail steering it back to the bank, we realised our luck. As quick as a flash, it leapt up tout of the water and was away down the sun-drenched bank opposite. ‘That was an otter’ we said many times to each other in disbelief just as Roger, having been inspecting the bank further on, returned to where we were standing only to  find that he, our expert otter spotter had missed the sighting. That seems a little ironic and certainly unfair, but needless to say we will be extending our otter spotting monitoring points to include one more, at Ponts Mill!