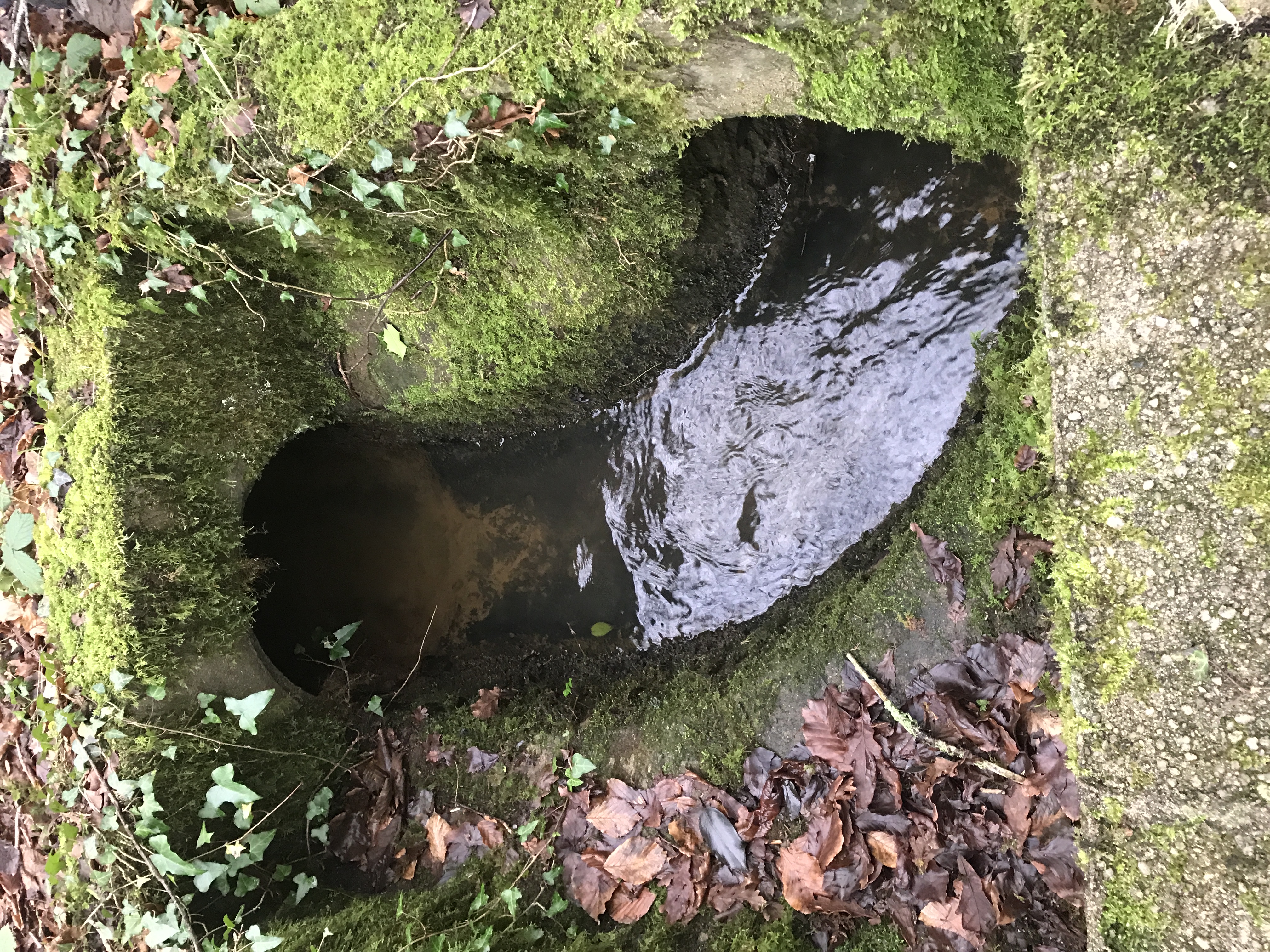 The Curious case of water in the Charlestown Leat

The curious case of water in the Charlestown Leat

The Charlestown Leat was originally built in the 1790s by Charles Rashleigh to carry water from the Par River in Luxulyan parish to Charlestown Harbour in order to maintain its wet dock. When Treffry built the viaduct/aqueduct (1839-42) however there was competition for water. The solution was to divide the water flow, with the Charlestown Leat crossing the Carmears Leat at the west end of the viaduct/aqueduct. In later years, the Charlestown Harbour Company diverted a short length of the leat into a pipe between Cam Bridges and the magnificent stilling pond/settling tank, also built by Treffry.  More recently, Charlestown Leat was made part of the UNESCO World Heritage Site, along with Luxulyan Valley and Charlestown Harbour.  The 7-mile waterway is still evident along its length but has collapsed or been dug up in several places and has proved uneconomical to reinstate as a working leat. It now only flows between Garker and the harbour. Charlestown Leat in the Valley has therefore not been actively used for decades and has consequently silted up over time and is not fit to carry water.

Therefore it was a great surprise when a regular visitor to the Valley reported to the Friends in late December that water was once again flowing in the leat. Two of the Friends immediately investigated and having confirmed this was the case set off to identify the cause.

What they found was puzzling and worrying.

Water was overflowing the Charlestown Leat launder and sluice gate at the western end of the Viaduct that takes water over into Carmears leat. 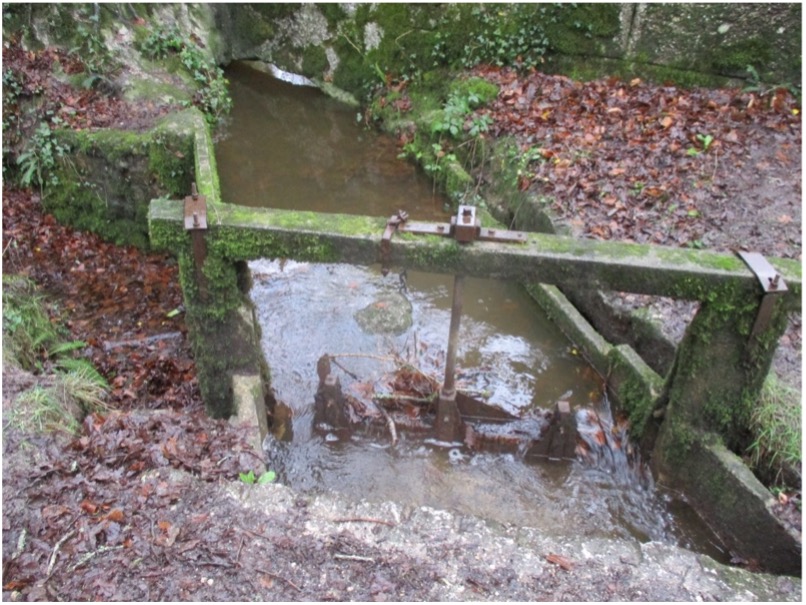 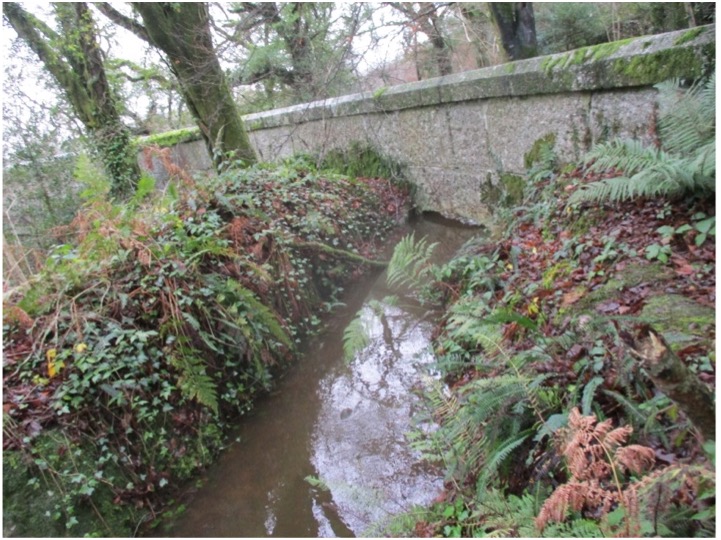 Above: The Charlestown leat launder and sluice gate overflowing (left) and water in the leat north of the viaduct that is normally dry (right)

Water was also flowing into the leat north if the viaduct wall and launder which runs along the west side of the Valley. This is usually dry. Tracking back, water was discovered coming out of the pipe at its eastern end near the stilling tank: 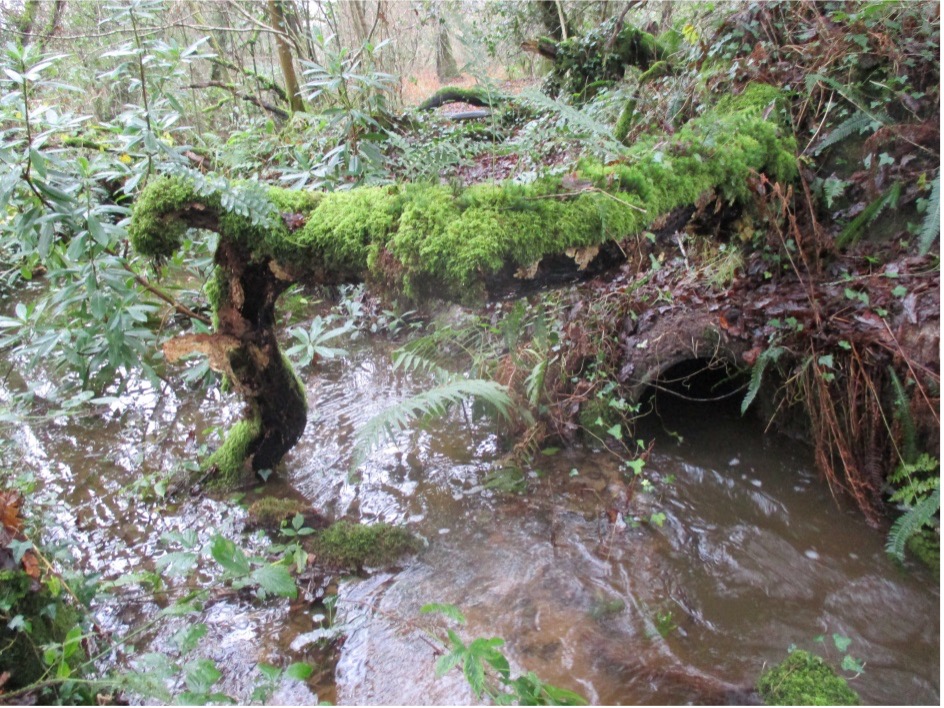 Left: water flowing through pipe normally not in use (right side of photo)

But where was it entering the pipe? The start of the pipe is near Cam Bridges and it was here that water was discovered flowing from the river into the pipe supplying the Charlestown leat between Cam Bridges and the viaduct. But why? It may just be the result of heavy rain and a higher level in the river. However, there was a board in position preventing water flowing back into the river and directing it instead into the pipe. Checking back over old records however, a photo taken in March 2019 showed there was no board blocking water from returning to the river. 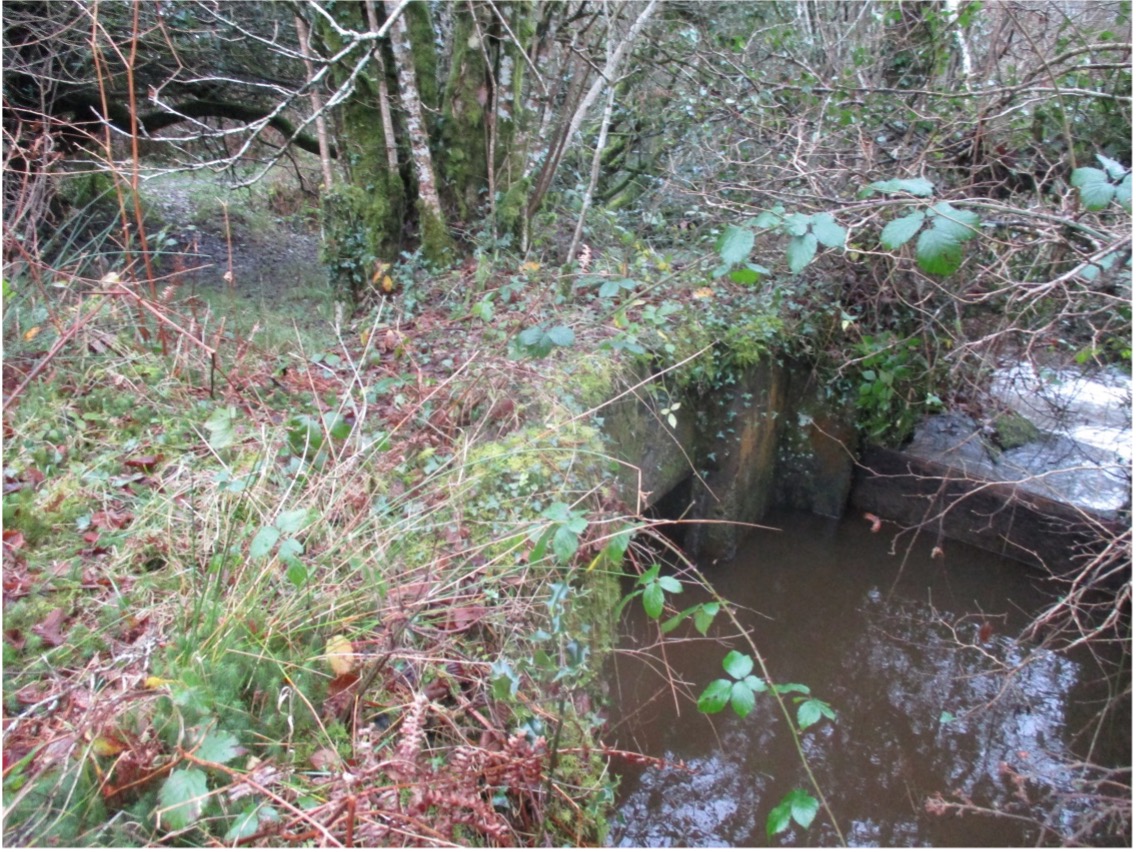 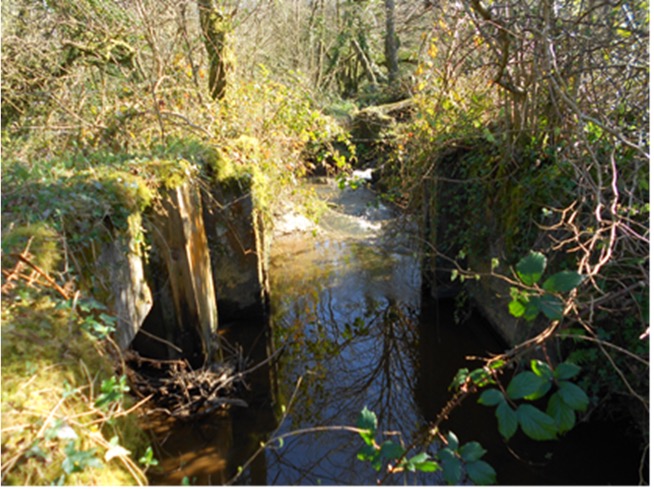 Presumably at some time between March 2019 and now, a board has been placed in the sluice gate and, if so when? And why? If the board had been there before, surely water would have been observed in the pipe before now? Enquiries locally have provided no answers to this puzzle.

So what does it matter? Surely it would be good to see the leat flowing again? The answer to that could be a ‘yes’, provided it was planned and carried out knowledgeably and with the permission of the landowners and other statutory bodies. Consideration needs to be given to the effect on the whole site, where one small change can have long-lasting and devastating effects either side of the leat.  It should not be forgotten the leat system is also part of the UNESCO World Heritage Site containing innumerable heritage assets and archaeological remains, many of which are hidden from view.

The viaduct itself is an internationally important scheduled monument; water has been seen leaking through the base of one of the granite abutments, confirming that water must be flowing through the aquafer part of the Viaduct. If allowed to continue this poses a real threat to the integrity of its structure and is the very reason water is prevented from flowing across it.

Water is also escaping from the leat down the hillside towards the rail line, which has been badly affected in the past by flooding when rainfall is exceptionally high. This is more likely to happen again if water is being diverted to where it shouldn’t flow. 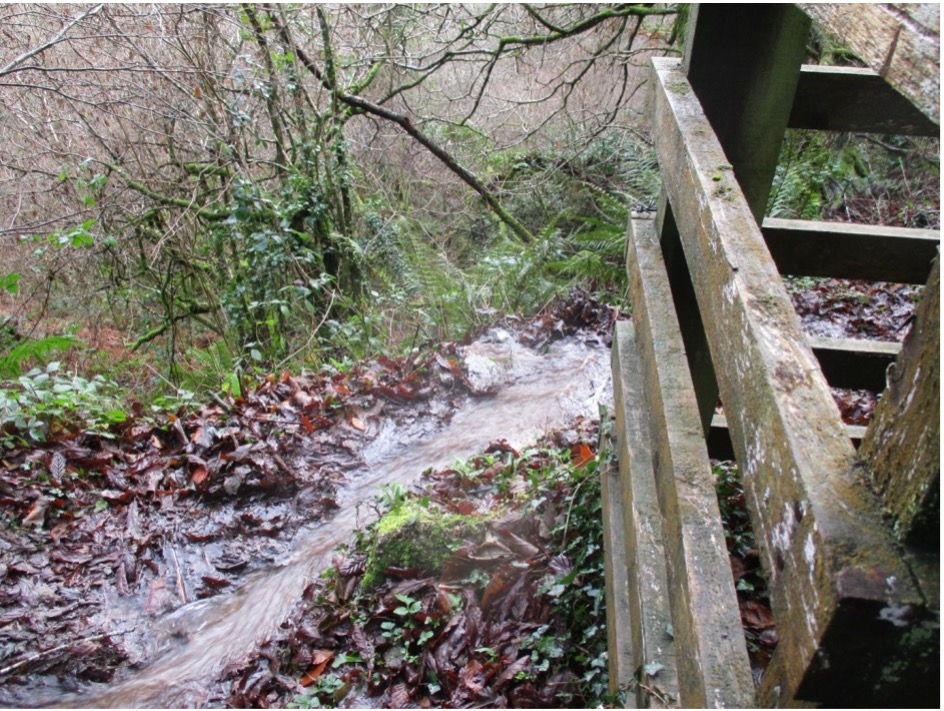 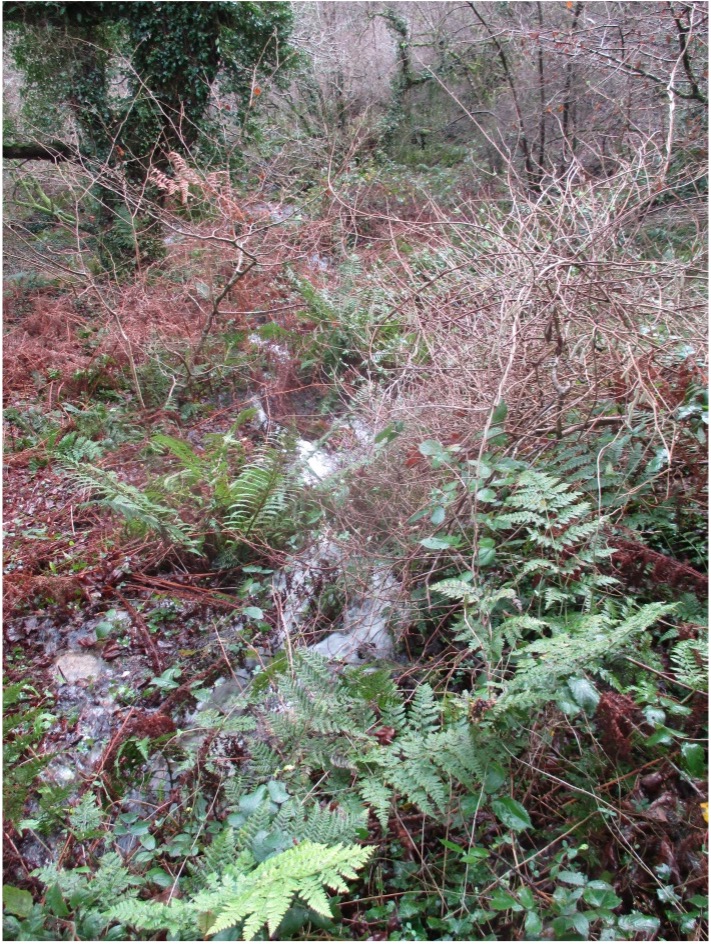 Above: excessive water running down valley path and down the hillside towards the rail track

Clearly the implications are many, the risks to scheduled monuments and infrastructure great, so urgent efforts have been made to contact the relevant authorities and landowners. Another inspection this week found that the stopboard has been partially dislodged which has reduced but not eliminated water flow into the pipe and the leat system. Should we get more heavy rain there is a real risk of another significant overflow.

Hopefully, action will be taken before historic assets and other infrastructure are damaged. The cause remains a mystery, but if anyone can offer any insight The Friends would love to hear from you.